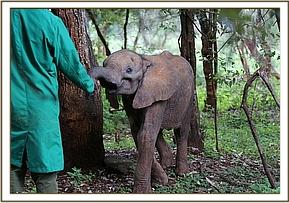 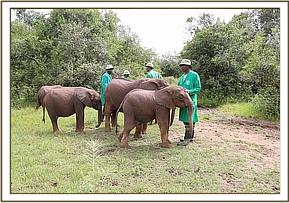 As we continue to support the elephant orphans in Kenya this little update gives you a feel of what happens when a baby elephant is rescued. Read More

A little information about the rescue of Sana Sana – “Upon arrival our team were welcomed by the Lodge staff and were immediately shown where the elephant was sheltering in thick undergrowth. She cut an extremely lonely figure, and according to reports, sought the camp staff’s company and safety each night by sleeping next to Samburu tribesman Dipa Lenyankera’s tent. This was understandable because by now she had a nasty wound under the tail having been mauled by a hyena. She put up little resistance when our Keepers swooped in to restrain her, after which she was laid on the usual canvas stretcher that our team had brought and with her legs strapped she was now ready for transportation to the waiting plane. This is when things became complicated because there was strong resistance to her being removed from site. It was a full two hours before a landcruiser vehicle big enough to transport the calf to the airstrip was made available for our team during which time numerous phone calls took place while negotiations to drive her to the airstrip were deliberated. Our team was all the while concerned by the time this was taking with the calf tied down and recumbent out in the bush where she had been rescued. Thankfully, it was eventually agreed that our team and the elephant be allowed to be driven in the back of the Namunyak Conservancy landcruiser to the airstrip. The Rescue Aircraft took off for Nairobi at 4.30pm”

An update on how she is doing. Sana Sana is normally a gentle and quiet girl though when it is bottle feeding time she can show some aggression towards the other young ones like Ngilai, Ndotto and Lasayen. Today during public visiting she quickly drank her milk bottle and then rushed over to Ngilai yelling, whilst he was also having his bottle, and tried to hit him down and snatch the bottle he was drinking from. The keeper warned her away and said she had had her share, but as she walked away she bellowed loudly, clearly not satisfied by that! Her shouting drew the attention of the visiting public, who marveled at the similarity between these babies and human ones in age, behaviour and characters